Skip to content
Forums
Members
From The Nikon D750... From The Nikon D750 To The Sony A7iii, Which Is Better?
Group: Registered
Joined: 2022-02-08
New Member
Profile Activity

I believe that mirrorless technology is still ironing out some issues at the moment. Certainly, more professionals, regardless of manufacturer, will begin to use full frame mirrorless cameras. When I made the conversion from film cameras (Pentax 67 and Eos 1 cameras) to digital cameras... It was many years after the invention of digital technology. Consider, as well, how you want to or need to concentrate when you are shooting or want to shoot. Recent advancements in faster, more precise focus ensure that you get the photo rather than just coming close to obtaining it. It seems that you want budget above picture quality, and there are several e-mount possibilities for this, including utilizing ef-mount glass on Sony cameras. However, I own both the A7rII and the D750, and I seldom ever use the D750 due to its size, IBIS, video quality, and 42MP image quality (compared to the A7rII). But there's more: F2 of good quality at a lower price. The Nikon has eight different zoom lenses to choose from, and it is more durable.

The A7III allows you to fire from the hip or from the chest without having to worry about your backs becoming weary from bending. Tiltable displays can assist with this, but D750 users are well aware of this. The somewhat harsher shaking in these locations is mitigated by the fact that stabilization is available with all lenses. Despite the fact that the majority of users only use their cellphones to publish photographs to Instagram, the app offers much more than a simple mobile photography platform. In this article, we've compiled a list of cameras that make it simple to capture appealing lifestyle photographs that can be shared on social networking sites like Instagram.

While photographing a bride as she goes up the aisle, you may lock on to her eye and almost never miss a picture as she moves towards your position. Ah, the Sony camera menu system, which is said to be a horror show of sorts. My expectations were raised to the point that I thought it would be like finding my way through Mordor.

It is an excellent pick because of its flexibility to adapt lenses from various manufacturers as well as its video capabilities. Because the mirror prevents light from reaching the sensor, DPAF, which is a live view only technology, does not function when the OVF is used to observe the scene. This implies that it is best suited for video, where it performs well. Since we're discussing the use of an EVF as opposed to an OVF, the debate about DPAF is irrelevant. I would also add that, as previously said, the D750 is not the most future-proof DSLR on the market...

The ability to charge your camera through USB is a useful failsafe if you're traveling for a shoot and have forgotten to carry your battery charger, or if you're shooting in remote locations and want to conserve weight. We have an Anker charger that is capable of charging four A7III bodies as well as a MacBook all at the same time from a single USB port. When the D750 was released, there was a lot of complaining about how it seemed like a toy when compared to other Nikon FX cameras.

2) D750 + mm, which is similar to the above but more general purpose and fullframe; it seems to have decent low light performance, however I'm not sure about the mm lens, albeit it's just $2,000 reconditioned. On the negative side, it's hefty, and I'm not convinced an APS-C sensor makes sense at this moment when fullframes like the Sony A7iii are so similar to or superior in every way. According to me, the A7III represents a watershed point in the advancement of mirrorless professional cameras.

Using our calculations, we discovered that moving to a Nikon mirrorless system while maintaining our existing lenses would have cost us more money than the whole Sony system we purchased (body, lenses, and speedlights). There aren't as many lenses available for Sony as there are for Nikon or Canon. However, the good news is that Sigma has made their whole Art series of prime lenses available in FE mount, providing a high-quality option at a more affordable price point. The Nikon D750 was a popular choice among photographers because to its wide dynamic range and high resolution. This is a testimonial to the quality of the sensors in both of the cameras.

However, there is still much to be said for the DSLR viewfinder in this situation. The lack of focus peaking on the D750 was something that I was unhappy with at the time. Because of peaking, I find that shooting my manual Nikon lenses on the Sony is more pleasurable than shooting them on the Nikon. I'm not experiencing any of the lag or confusion that I've read about from others.

Unlike previous Sony cameras, the D750's grip is properly recessed, and I didn't have the dreaded 'pinky issue' that I'd seen with other Sonys, when my tiniest of tiny fingers would hang in mid-air below the grip. Within a minute or two, I was completely at peace with how everything was laid up - many of the settings are identical to those on the Nikon D750, which is a huge assistance. The A7III includes a sensor cleaning feature that activates after shutting off the camera and is activated by shaking the sensor for a few seconds after turning off the camera. Because the sound that this produces is similar to the sound that is made while taking a photograph, after you switch off the camera, someone could believe that you are attempting to snap his picture in disguise. At dpreview, there was an intriguing demonstration of focusing with the A7RII in low light.

After a week, I received an email stating that the focusing system was within specification. I allowed them to proceed with sensor cleaning, which I had requested as well, but it became caught in some kind of backlog due to an AF adjustment request, and it took about a month to be done in all. I understand that they were adamant about not adjusting the body without the lenses. It's possible that it was inside their lens's field of view, so they didn't probe any further. All lenses, with the exception of Sigma lenses, would be in good working order if I sent them together. 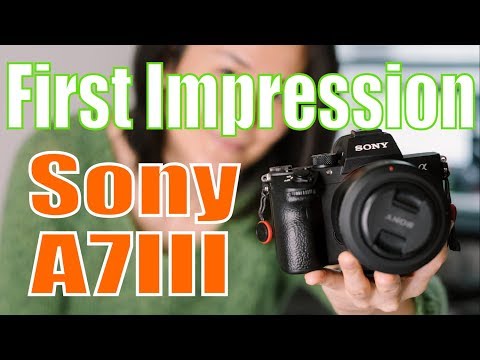 We were invited to Canon both times, and both times, after much deliberation, we declined. A day with the A7III convinced us that it was worth going through all of the anguish and financial stress of replacing a whole camera system for two people at the height of wedding season. The second issue with holding is that the overhang beneath the shutter - the part of the overhang that touches the middle finger - is not large enough and pleasant. Unless you tighten your grasp on the camera, you are bearing the weight of the camera with your middle finger. When a single hand is utilized for a lengthy period of time, I believe callus might form on the middle finger.